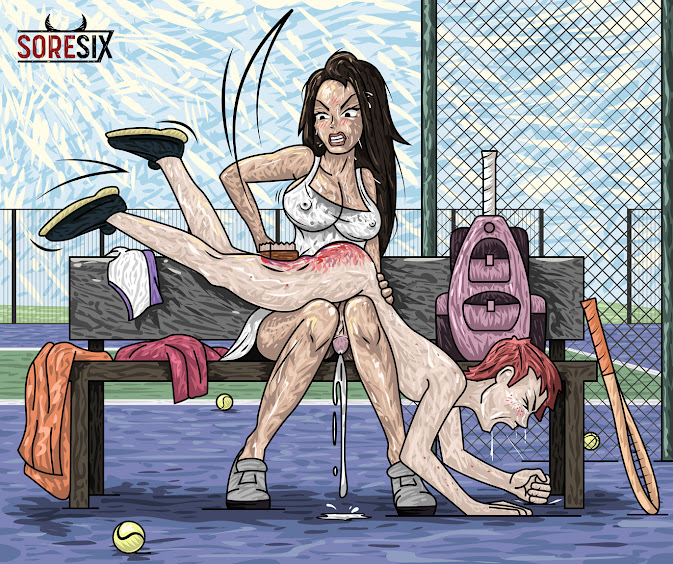 "That's three matches in a row. You could at least TRY to make things interesting." Said Karly teasingly as she strutted to a nearby bench.

Joey knew full well why he'd been losing all day. Simply put, he couldn't stop admiring his beautiful girlfriend's ample breasts. She'd surprised him with the implants about a month ago, and he couldn't have been more grateful. They did, however, tend to thrust him into numerous trance-like gazes. Playing tennis with her had certainly proved challenging. Karly's tits jiggled and bounced with each step she took. His eyes had been glued to her chest during each rally, thus neglecting the bright yellow ball.

"Hello, earth to Joey. A response would be nice..." Said Karly after taking a sip from her water bottle.

Joey propped his racket against the bench, and was soon ogling Karly once more. She was seated and hunched over, digging through the contents of her backpack. Her glistening skin was doused in sweat. Her skimpy white shirt had practically turned transparent from the salty wetness.

"Is everything okay? It seemed like you weren't even trying out there. I NEVER beat you by that much." Said Karly as she retrieved a towel from her bag.

Joey was fully captivated at the sight before him. Karly was clearly bra-less, and her hard nipples poked out prominently through her filthy shirt. He'd failed to process a single word that had come out of her pretty lips.

"What the hell, Joey! Do you seriously have a boner right now?" Asked Karly abruptly.

Joey quickly snapped out of his daze. He then frantically moved his hands to his crotch, covering the intrusive stiffy that had tented his shorts. He was thankful that they'd had the park all to themselves.

"What's gotten into you? I swear, you've turned into such a pig ever since I got these implants. This is the THIRD time you've popped a boner in public this month!" Said Karly as she tossed her used towel next to her bag.

"I'm sorry... but you're just so beautiful." Said Joey with a grin and an exaggerated wink.

"I'm not kidding around, Joe. I feel like I'm dating a zombie. All you do is moan and drool over me. I'm assuming my tits are the reason you sucked at tennis today..." Said Karly with a smirk.

Joey shrugged and then snuck a quick peek at Karly's sopping breasts once more. He truly couldn't help himself.

"Are you kidding me? You can't even look me in the eyes anymore. It's like these implants are more important to you than my feelings. I swear, I think I'm going to downsize these things." Said Karly angrily.

"Oh, so now you're trying to tell me what I can and can't do with my body?" Asked Karly curiously, flexing her feminist values.

"Honestly Joe, getting rid of them seems like the quickest way to get my old boyfriend back. I'm flattered that you like them so much, but they've caused nothing but trouble." Said Karly with crossed arms.

"Please don't get rid of them. I'll do anything." Pleaded Joey somewhat pathetically.

Karly grinned widely. Her devious plan was working perfectly. Joey thought that she'd gotten the implants as a gift for him, but that was only half true. She knew full well how influential her bouncing titties could be. She planned to use them to her benefit in order to fulfill a lifelong fantasy of hers. Showing up to play tennis without a bra had just been another carefully crafted tactic. Everything Karly did was calculated.

"Anything, you say?" Asked Karly with an evil smile.

"Okay then, here's the deal. I'll keep my implants if you allow me to punish you whenever I please. It's either that or you can kiss these babies goodbye." Said Karly as she jiggled her breasts teasingly.

"Punish me? That sounds awfully kinky." Said Joey with a grin and another exaggerated wink.

"This isn't a joke, Joe. Gawking at my tits and neglecting my feelings will NOT be tolerated anymore. I am NOT your sex doll, and I demand to be treated with respect." Exclaimed Karly in a confident manner.

"Alright, alright. I guess we could give it a go." Replied Joey.

"Good. I think you're in dire need for some punishment right this instant. I want you to strip naked and stand in front of me. Feel free to leave your shoes on. I bet I could fry an egg on that pavement. My plan is to scorch your fanny, not your feet." Said Karly with a glare and a sassy wink of her own.

"In the middle of the park? Are you nuts?!" Asked Joey.

"No, I'm not nuts. I figure since you were comfortable enough to get spanked all day at tennis, then you wouldn't mind getting a real bare bottomed spanking at the side of the court." Said Karly.

"Alright, I'll do it." Said Joey as he began to strip naked under the warm sun.

Karly's heart raced. Her cruel ultimatum had worked. Alas, her dream was about to come true. She giggled at her boyfriend's reddening face. His clothes had been tossed onto the bench, and he stood before her, buck naked. His menacing erection had pointed straight up to the sky. Karly suddenly scooted her pert booty to the center of the bench. She then gently took hold of her bratty boyfriend's wrist.

"Alright, you pervy little boy. Get across my lap. And make sure that filthy penis of yours falls between my legs." Said Karly sternly as she patted her sweaty, bare lap.

Joey gulped loudly, and allowed Karly to pull him across her shimmering legs. Soon, he was doubled over with his feet hoisted high in the air. Karly split her warm, salty thighs for him, only to squeeze them shut around his pulsating, sensitive organ. He couldn't resist pumping up and down on her lap, essentially fucking her tightly closed thighs.

Karly watched joyously as her boyfriend bounced his booty up and down. She hadn't anticipated such an enthusiastic reaction. All of her sweat had acted as a lubricant. It wasn't long until he moaned loudly and exploded all over the blue pavement below. She smiled down at his now motionless and exhausted body. She hadn't even started the spanking, and he'd already tired out completely.

"Well, I'm glad we could get that out of the way." Chuckled Karly as she raised her palm.

Karly's palm clapped against Joey's apple booty in rapid secession. Joey wasn't all too concerned about being seen by a curious stranger anymore. The excitement and pleasure that he had felt seemed to outweigh any sort of insecurity. His erection had persisted, and he was soon bouncing up and down atop Karly's knees once again. His pink bottom jiggled with each thrust.

"It would have been nice if you'd shown this much energy while we were playing tennis. I'm glad you're enjoying yourself for the time being, but you'd better buckle up. Getting spanked by me isn't always going to be fun and games. This is a punishment, and I'm not going to go easy on you today. You might even choose to opt out and kiss my boobies goodbye after you find out how serious I am about spankings." Scolded Karly.

The second round of rapid humping had certainly convinced Karly to step up her game. Luckily, she'd packed a secret weapon. She grinned menacingly as she quietly dug through her bag. She soon found the hairbrush buried within, and firmly gripped the handle. She hadn't normally packed a hairbrush in her tennis bag. Of course, the implement was just another pre planned, calculated element.

"Speaking of tennis, I think now would be a great time to practice my OVERHEAD SMASH!" Yelled Karly comically as she raised the hard wooden brush high over her head.

Karly hit Joey rapidly and without pause, which caused him to flail about wildly. She held him tightly and squeezed her thighs together as hard as she could. Sweat was soon pouring down her face and splashing about after each stroke. She gritted her teeth as she began smacking down at his mid thighs.

Joey cried and shouted at the top of his lungs. He tried his hardest to wiggle off of Karly's lap, but his attempts had failed miserably. Karly was a very strong young woman, and she was able to pin him down with ease. Snot was soon dripping in gobs from his nose, and drool spewed from his bottom lip. He could feel droplets of Karly's sweat raining down upon him, wetting his bare bottom and his back. The pain was unbearable, but he had no other option but to endure it. He begged for mercy, but none was given.

"You can get up now, baby." Said Karly as she split her thighs, freeing Joey's now flaccid penis.

Joey struggled to his feet and immediately rubbed his burning bottom. He paced about, unconcerned with his nakedness. The only thing on his mind was reducing the throbbing, burning sting that Karly had inflicted.

"Where the fuck did that hairbrush come from?!" Screeched Joey as he danced about.

"I've been planning this for a very long time, Joe. It's amazing what a nice set of tits can accomplish. I've always known about your weakness for big boobs. Unfortunately for you, these boobs aren't free. You fell right into my trap. Or should I say... right into my LAP!?" Said Karly with a giggle.

"It hurts so bad!" Exclaimed Joey. The pain on his rump seemed more pressing to him than the crafty trick his girlfriend had played.

"That's what a true spanking feels like. You still have a choice, though. I could downsize my boobs, which would put a stop to all of this. Or you could submit to me, which would mean a lot more spankings for you. Of course, if you submit, you'd be able to bury your head into these big boobies and cry from all of the sore bottoms you'll get." Said Karly with a wide grin.

"Damn, you're really into this aren't you?" Asked Joey with a subtle grin.

Karly nodded her head casually and crossed her arms, perching up her soaking breasts. Of course, the gesture had gotten Joey's immediate attention. He gazed down upon them and let out a sigh. He simply couldn't imagine life without them.

I guess I'll take the spankings..." Mumbled Joey as he continued to rub at his tender bottom.

"I'm overjoyed to hear that, Joe. Now put your clothes on and walk with me to the car. You're in for another naked bottomed trip across my lap the moment we get home."

Popular posts from this blog

Last One Down the Mountain Gets a Smacked Bottom 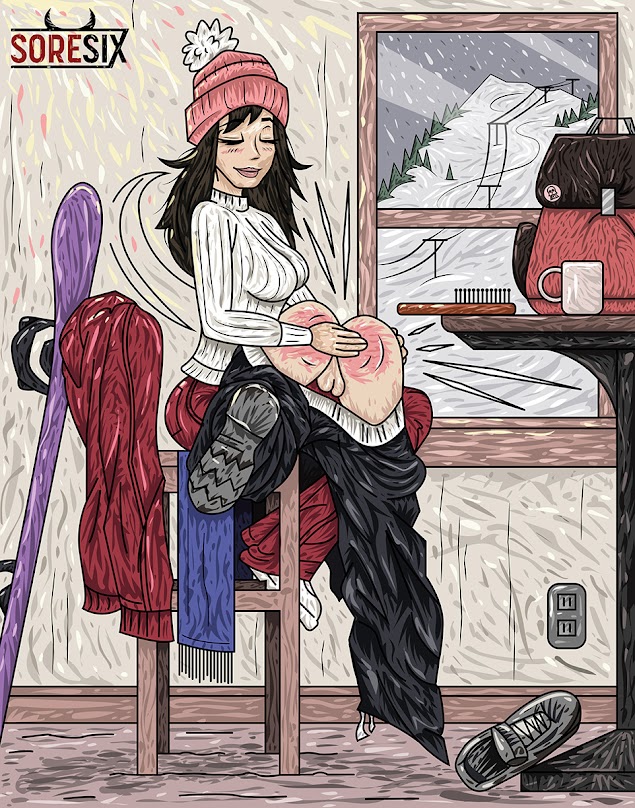 LAST ONE DOWN THE MOUNTAIN GETS A SMACKED BOTTOM "Last one down the mountain gets a smacked bottom." Said Sara with a giggle as she skidded next to Sean. Sean couldn't believe what he had just heard. He'd been a spanko his entire life, but he'd never told Sara about his fetish. After all, they'd only been dating for a month. He swallowed hard and tried his best to mask his excitement. "Alright, deal." Said Sean with a grin. The young couple counted down from three and then launched off in unison. It didn't take long for Sean to put the brakes on, which allowed Sara to zoom right past. He desperately wanted to be spanked. He only hoped that Sara's playful bet was genuine. Of course, Sara won by a landslide. She stood with a hand on her hip at the bottom of the mountain, waiting patiently for Sean to join her. "I think you and I have some business to discuss at the lodge" Said Sara with a grin as Sean skidded to a halt. "Yes, m
Read more